Thermal Imaging drones are ideal for use to spot areas of trapped moisture or isolated areas of damp in a roof and to also spot failing cells in a solar panel. It is a good idea to employ an infrared drone survey anyway just to see how your roof or solar panel are faring – whether there is a leak or not!

Likewise, in solar panels faulty cells (or those that need attention) will show a different heat signature than those around them.

Why not upgrade your drone roof survey to include a full thermal report as well?

Thermal imaging – or infrared (IR) thermography – is the process of acquiring, measuring and analysing thermal information from a non-contact device – in this case Man with a Drone uses the Parrot Anafi Thermal drone which optimises it’s FLIR Lepton 3.5 camera.

The Parrot ANAFI Thermal will transform invisible IR radiations, or heat transfers, into coloured images which can then be interpreted by the human eye.

For roof surveys the drone’s IR camera helps identify areas of damp or water masses within the roof and it can also be used for spotting escaping heat – therefore leading back to holes in the roof where water leaks can also occur. Standard images will spot holes and many other problems…but IR can spot hidden water masses or damp areas that standard imagery cannot.

The basic principle behind the technology is that moisture adds thermal mass to part of a roofing – when the roof cools this “damp area” holds onto heat longer than the dry material next to it and cools at a slower rate. The thermal camera of the drone captures that heat the way that normal cameras capture visible light – creating an image that shows the extent of the moisture collection within the roofing system. The water mass will show as an anomaly (different colour, depending on the heat loss).

In the summer (the outside temperature being above 10 degrees C and sunny) the roof area will heat up – as will the damp / water mass – in the winter the householder will need to turn on the heating in order to achieve the same results. Ideally the survey should be conducted when the sun is losing its power – mid to late afternoon. If the roof has just gone into shadow this can be perfect as any water mass will lose its heat slower than the surrounding area. So, in a cooling roof which is generally showing yellow in colour, the corresponding water mass may show up as a darker colour (red).

The spectrum of colours on an IR read out will range from red (the hottest) through orange, yellow, green, blue and finally black (the coldest). When taking IR images of a row of houses in the winter time, those with heating on will have red signatures…whilst those who have left the heating off will record as blue.

See images below – these were taken at the request of a client who is experiencing water ingress above his bathroom. One of the areas pinpointed, before the survey was the area around the roof outlet – the resulting images show a definitive area that could be a problem (either heat loss or damp). Note that all of the neighbour’s outlets are not showing similar heat signatures. 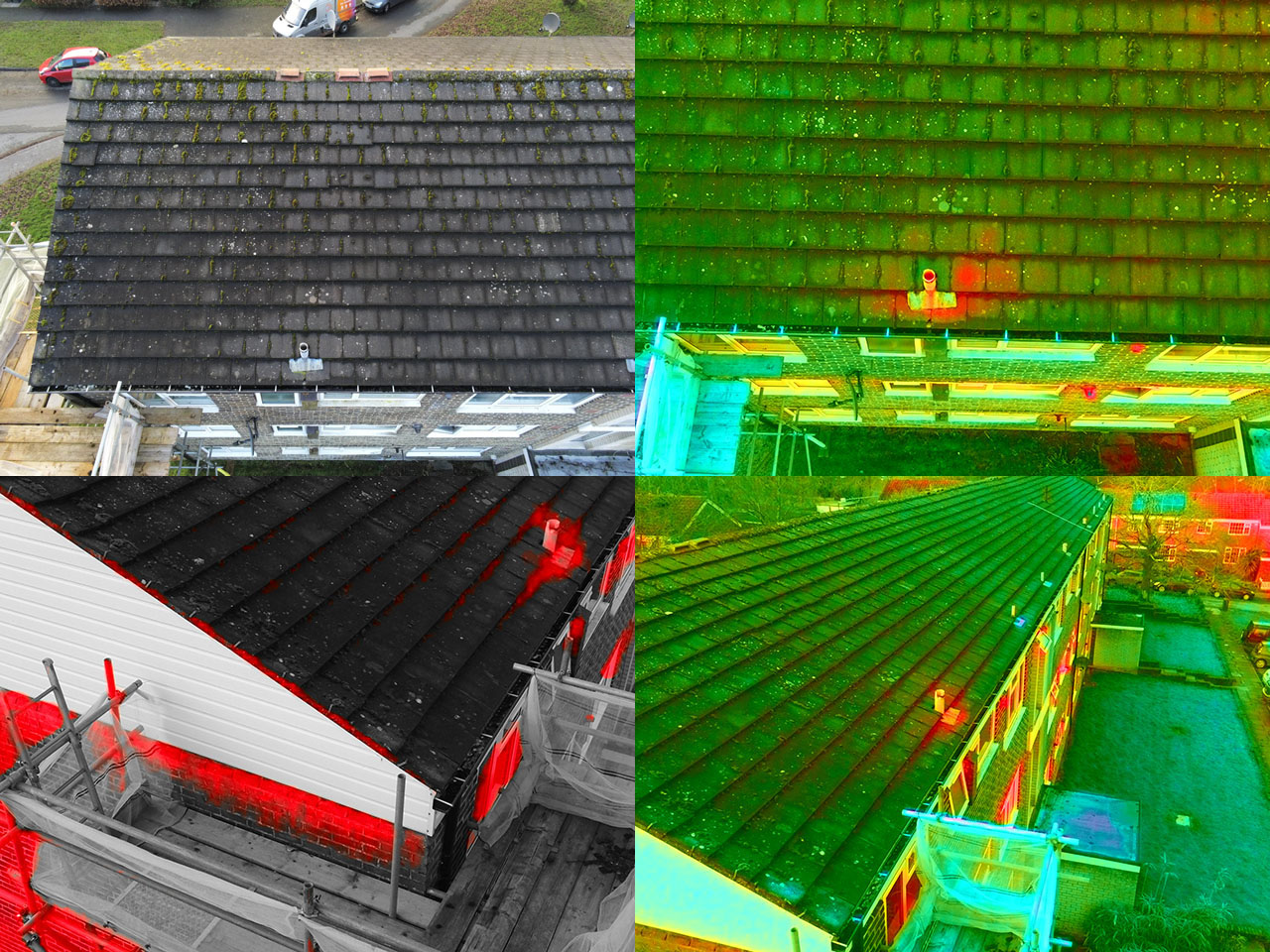 The image below shows the same roof – this time as a whole. A further heat / damp signature is again showing in another area that the client had pinpointed. Note that the rest of the roof is not showing the same signature, despite neighbours being in and heating being on – and it is important to also note that the whole roof had been subjected to the same weather conditions. There is heat coming from the houses at the end of the road and a freshly parked car with its engine still glowing, proving that the camera’s range is fully functional. 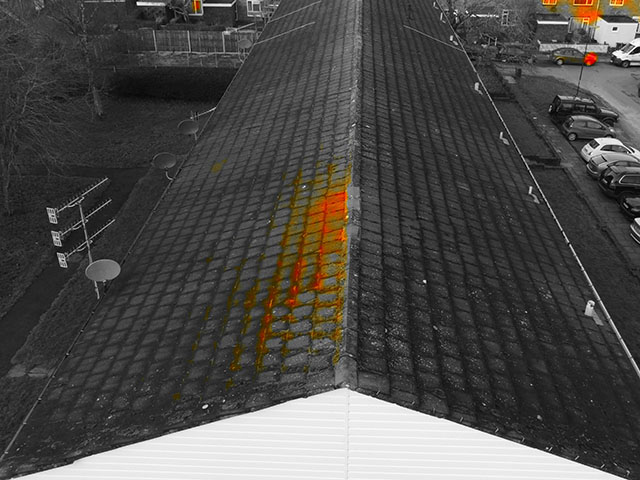 And finally, the image below was taken on a development site. This demonstrates both ends of the infrared spectrum. Note the heat signatures (red / yellow) coming from the working machines – the areas of light blue are particularly wet areas of concrete or mud. 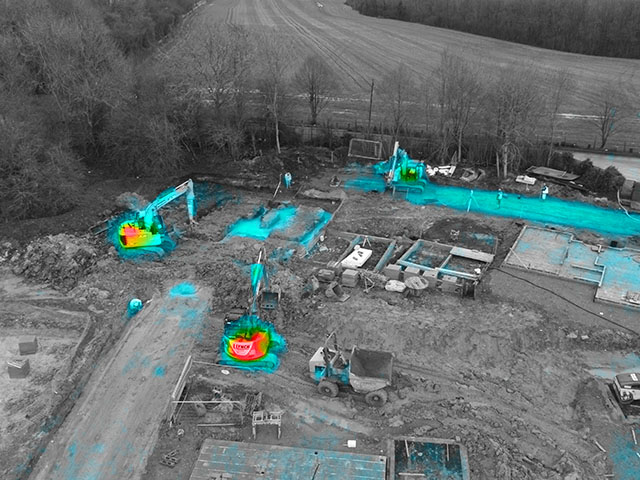 As the Parrot ANAFI Thermal has two cameras (one standard and one IR) Man with a Drone can provide standard roof images at a very high 21MP resolution – and then capture an infrared still of the same area which, with its spectrum of colours, can be used to help your roofing professional to identify areas of concern.

HD1080p / 4k videos are also available in both RGB and IR. The images or video can be either standard or pure infrared or a mixture of both and Man with a Drone can also provide a spot IR picture – this identifies just the areas of highest / lowest temperature.

As well as roof surveys, the versatile Parrot ANAFI Thermal is used by professionals in search and rescue, energy monitoring and industrial applications.

Why use Man with a Drone?

As technology improves, drones are becoming more widely available and as such the consumer will be faced with a wide range of options, services and prices. It is important to hire a commercially trained remote drone pilot, like Man with a Drone, who will have a commercial licence, insurance and the skill to provide the best quality results whilst maintaining the appropriate safety rules (including the CAA Dronecode).

At Man with a Drone we always pitch our price at the lower end of the pricing in order to be competitive. Although we are based in West Sussex we are happy to travel anywhere – East Sussex, Surrey, Kent, Hampshire, the London area – in fact anywhere in the UK.

What is the process?

Contact Man with a Drone on 07875 956290 – we will arrange a time to visit the property and complete the work, subject to any safety requirements and permissions. Images are normally sent to the customer on the same day – with videos sent a couple of days later once they are completed (as these take a little longer).

All for the most competitive pricing in the drone market!